Advanced Design Bikes and Wheelchairs to share and on exhibit, and innovative visions of our human-powered future

Though Queens is already home to the broadest assemblage of peoples, speaking more different languages than anywhere in the world, it is the intention of the organizers to involve local communities everywhere, from 191 other countries, 49 other States, 61 other counties, and 59 NYC Community Boards, 360 venues, all, in effect, represented by their local residents’ entries. Through the Internet and a focus on sustaining localized activities, we will endeavor participation to be maximized everywhere and thereby enable everyone who desires, whether here or in their own community, to be involved.

We are in the process of gathering another group of individuals who would like to declare their support for this program. The list below was assembled when we were still the operators of the Bike and Boat rental concession in Flushing Meadows Corona Park in New York City, during our first attempt to bring this all together previously. Unfortunately, electric-assisted human-powered vehicles were still in legal limbo at that time, and doing this would not have been possible. The current version of this event does not require that the location of previous World’s Fairs any longer be central to this effort. (In fact, New York City is currently discouraging electric bikes, even though they can not be distinguished from ordinary bikes) and trikes, from using the park. It is expected that this situation will change soon but it doesn’t matter, since work will be going on in small groups, using permitted space, to build their vehicles, everywhere in the world. All public streets and other public spaces are always available to exhibit and share in the enjoyment of these new means of getting around.

Garrett Brown, Inventor of the Steadycam and Skycam

Like Fairs of the past, the emphasis here will be on creativity, expression, tolerance, education, technology, and enjoyment. Unlike the usual format, there will be no large and expensive pavilions meant to be dismantled after the event. Instead of limiting participation to large-scale organizations, it is the intent of the organizers to put the focus here on the accomplishments of individuals and small groups of people by demonstrating our ability to have a positive effect on our common existences, to contribute to healthier and more active lives and to reduce the harm we may, even unintentionally, cause each other.

Financing is always an issue and first of all, as befits an anniversary celebration, we will invite all of the former exhibitors to be a part of this event. We will ask them to provide as many small grants as they can, to various deserving local efforts, to commemorate their previous involvement. We are also inviting any other business or government unit to do the same thing, to provide small amounts of money to individuals and small groups within their communities to help them develop a project which can be part of this event. The Organizing Committee, charged with turning this idea into a reality, will be comprised primarily of volunteers and will largely use their own resources and contributed facilities to guarantee the success of this effort. We can further encourage these developments by expediting access to travel, hospitality and other needed support to visit designers and builders, by soliciting help, especially from those who hail from their home towns, to help enable the broadest involvement possible.

While experienced professionals in various areas will be needed to help guide this undertaking, it is our intention that, through the broad participation of students and non-profit organizations we can keep costs to a minimum. A detailed working plan and timeline will be developed soon and distributed to all those aiding in this effort.

As the place where the Flushing Remonstrance occurred, one of America’s earliest attempts to establish universal respect for the differences in belief that exist, and the first home of the United Nations, there is no location more suitable to build upon these efforts to venerate our humanity. As in previous Fairs, appreciation of others from different backgrounds, having a good time, experiencing evolving technologies, and exposure to varied forms of expression are central to the event.

What will be different about this version of a World’s Fair will be a vigorous effort to encourage direct involvement in these issues, to maximize participation by individuals rather than institutions, and an emphasis on heightening appreciation of the potential for people of any age or background to make significant contributions to our common evolution, to engage their own creative energies in the service of others. Applying ourselves to issues like nutrition and the use of natural resources that concern all of us will enable participants from everywhere to relate to these important questions and their resolution.

One subject that concerns us all is the production and provision of healthy and nutritious food. This also involves the growth and gathering of foodstuffs as well as improved guidance in the preparation and consumption of life-preserving and life-enhancing nutrition. Being exposed to comestibles from everywhere in the world gives us the opportunity to improve and change our habits, to appreciate the lessons learned from different cultures over time regarding the best ways of appreciating our natural environment and its products, expanding our tastes, and improving our choices. We will encourage suppliers to focus on healthier, more economical, and therefore preferential foodstuffs. Keeping in mind the effect of these choices on the health of our planet is another important dimension. How we use our land is a factor in how the future looks and must not be ignored.

While a number of subjects will receive significant attention here, we recognize that important technological advances have made real breakthroughs in lightweight transportation possible today and the economic and environmental burdens of the current system are considerable. This high-profile, prestigious showcase can serve to motivate designers, builders, and allied enterprises from everywhere to bring new ideas forward, and into the real world quickly. Developing variations on the common bicycle, to help bridge the gap between minimal and maximal transport, is long overdue. We know that bicycles, wheelchairs, artisanship, and stress on shared resources are common features in the lives of people from every corner of the world.

Using our combined ingenuity, creativity, and experience, we can reshape how we get ourselves, and our goods, around, how we deploy our shared resources, and how we help influence others to understand their best choices. If we do this in the process of enjoying pleasurable experiences, there is hardly a better way to illustrate this potential and its desirability. While the public is accustomed to regarding “educational” activity as possibly boring or tedious, here the opposite is the case.

For instance, these machines, whether previously called wheelchairs or recumbent trikes, can be used by everyone, if made well enough, not just a special population. Making available colorful, easily-usable, creative vehicles, new varieties of electric-assisted and human-powered transportation, regardless of former definition or category, can completely remove the existing onus of using a wheelchair. The best-designed vehicles can enjoyably be used by the young, the old and everybody in-between. These machines might well end up resembling each other more than they look like their current versions. We can vault over ancient and worn-out categories into new and more relevant distinctions. Is it weather–protected? Is it beautiful? Can you carry your friends on it? Is it different than anything you have ever seen? Do you wish you had made it? Can you use it when you want to and leave it conveniently for somebody else to enjoy when you are finished?

Encouraging innovation and accelerating the healing process of the planet is now job number one. There can be an infinite number of worthy projects cataloged, described, shown in action. This resource will begin by culling the best examples from existing databases.

We will encourage new ideas, even if only in the form of a drawing, a model, or something that only the designer/builder rides, which can be practically anything and may be used by other designer/builders only, in a kind of exchange. If the public is going to be allowed to use it within a confined space and protected environment, a more strict set of standards will have to be used. If it can be ridden away, to use in the rest of the park, the most stringent requirements will exist. We will employ a peer-review process, so that selection of participating vehicles is as fair and high quality as possible and so that all parties to this activity can have what amounts to a continuing ongoing forum so they can contribute their ideas and concerns, and participate in the process of addressing them.

Everybody needs green spaces, exercise, and safe, non-destructive, and affordable ways to get around.

Providing some shelter, as little as a large “Umbrella” is essential in making our public spaces fully habitable. This endeavor will also encourage the design and construction of unique, beautiful, and interesting structures, to provide weather protection, especially to public transit users. We will also encourage a process that will enable local artists, craftspeople, and others to formulate these structures for their own neighborhoods and for those communities to have a hand in this process.

We are dedicated to improving everyone’s ability to enjoy their shared spaces, especially parks by preserving and enhancing their natural beauty while expanding access to new, healthful, non-intrusive activities. In the words of urban historian Lewis Mumford, the Godfather of the 1939 New York World’s Fair, “Year by year our cities grow more complex and less fit for living. The Age of Rebuilding is here. We must remold our old cities and build new communities better suited to our needs”. 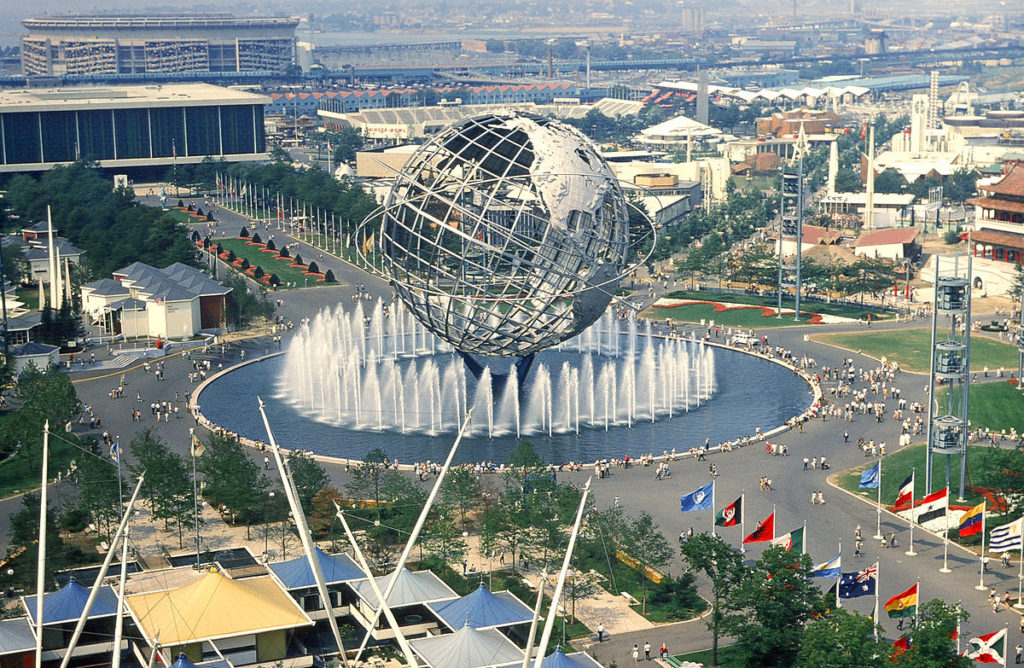